LOS ANGELES – Twelve years ago, widespread destruction from Hurricane Katrina on the Gulf Coast helped compel federal engineers 2,000 miles away in California to remake a 1950s-era dam by constructing a massive steel-and-concrete gutter that would manage surging waters in times of torrential storms. 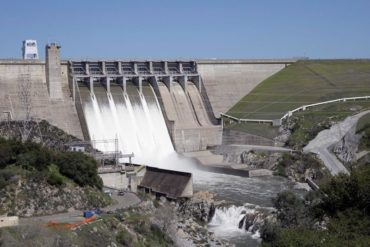 Water flows from five of the eight flood gates at Folsom Dam Friday, March 18, 2016, in Folsom, Calif. Recent storms and snow runoff have caused The U.S. Bureau of Reclamation, which manages the dam, to open the gates, their first use since 2012. (AP Photo/Rich Pedroncelli)

The nearly $1 billion auxiliary spillway at Folsom Dam, scheduled to be completed later this year, stands in contrast to the troubles 75 miles away at the state-run Oroville Dam, where thousands of people fled last week after an eroded spillway threatened to collapse – a catastrophe that could have sent a 30-foot wall of floodwater gushing into three counties.

Together, the two dams illustrate widely diverging conditions at the more than 1,000 dams across California, most of them decades old. The structures also underscore the challenge of maintaining older dams with outdated designs.

“Fifty years ago, when we were evaluating flood risk, the fundamental assessment was the climate was stable, not changing. We now know that is no longer true,” said Peter Gleick, chief scientist with the Pacific Institute, a California-based think-tank specializing in water issues.

“We need to look at the existing infrastructure with new eyes,” he warned.

Back in 2005, Katrina’s deadly path became an arguing point for U.S. Rep. Doris Matsui, a California Democrat who was among those pushing Washington for improvements at Folsom Dam, perched 25 miles from 500,000 people living in Sacramento, the state capital.

“I used that, vigorously, to say we are the second-most at-risk river city in the nation,” Matsui said, after the Category 5 storm swept through New Orleans.

State officials now face questions about maintenance at Oroville Dam, the nation’s tallest at 770 feet, and why a decade ago they dismissed warnings from environmentalists that more needed to be done to strengthen its earthen emergency spillway.

After years of drought, Northern California has become waterlogged this winter from heavy rain and snow. Oroville Lake is brimming, and water managers have been using the main spillway, which is lined with concrete, to lower the water level.

The emergency spillway is a brush-covered hillside below a masonry lip and had never been used until last weekend. When water gushed onto it, the ground began eroding, and it was feared the intake lip could collapse and water would surge down the hill.

An investigation into what went wrong could take months.

John France, vice-president and technical expert on dams for the engineering consulting firm AECOM, said the problems at Oroville should raise alarms across the country.

“Most of the dams in the United States are over 50 years old, when we didn’t understand floods as well as we do now. So we have a number of dams in the U.S. that have spillways that aren’t large enough for the floods that they should be designed for,” France said.

Arguments over water, how it’s stored and who gets it are as old as the state, and California has often been criticized for not doing more to improve its water systems as the population edges toward 40 million.

In a place known for alternating cycles of prolonged drought and biblical rainfall, the idea of asking reservoirs to store extra water for dry times frequently clashes with environmentalists, who want to see rivers flow freely.

At Oroville, opened in 1968, construction crews recently patched cracks on the main spillway, and a state inspector judged the repairs “sound” in a February 2015 report. However, a gaping hole ripped open on that spillway two weeks ago, starting the series of events that led to use of the emergency spillway and evacuation orders for nearly 200,000 people.

Since then, crews dumped thousands of tons of rocks to shore up the damaged spillways and residents were allowed to return home Tuesday, after the lake level dropped.

“They never spend money unless they have to,” he said. “If we were a federal facility, you don’t see this happening.”

At 340-foot high Folsom Dam, operated by the U.S. Bureau of Reclamation, the huge concrete-and-steel chute being constructed by the Army Corps of Engineers is expected to add as much as 40 per cent capacity to the main spillway that controls water flowing from the reservoir behind it.

It’s designed to allow safer releases during times of high water, precisely the challenge that led to fears of catastrophic flooding at Oroville.

When completed, the spillway can act like a second dam, allowing operators to release water through a series of gates and lower the reservoir level when a major storm is approaching. It includes a chute more than half a mile long. Another advantage: The new spillway gates will be 50 feet lower than those on the dam, allowing for earlier releases of water.

The government needs to test the spillway this year to see how it will work. Meanwhile, there are proposals to increase the height of the dam with the potential for extreme weather.

In light of the Oroville crisis, Republican state Sen. Ted Gaines said he is considering asking the federal government for a safety review at Folsom Dam, the new spillway and nearby levees, given their proximity to Sacramento.

It’s not an abstract concern.

During heavy storms in 1986, a temporary dam broke open, sending roaring waters downstream to Folsom Dam. In response, officials released more water from the dam than flood levees that guard Sacramento were designed to handle.

That time they held.

Given the scare at Oroville, “I don’t think we are out of the woods yet,” Gaines said.