The severe storms that have struck the southern United States have prompted the Storm Prediction Center (SPC) to issue a “high risk” outlook in the month of January for the first time in nearly two decades, Risk Management Solutions, Inc. (RMS) said on Thursday. 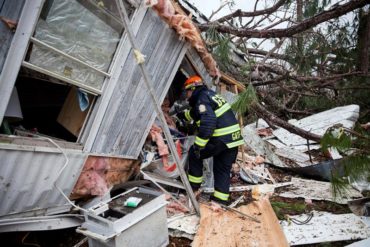 A rescue worker enters a hole in the back of a mobile home Monday, Jan. 23, 2017, in Big Pine Estates that was damaged by a tornado, in Albany, Ga. Fire and rescue crews were searching through the debris, looking for people who might have become trapped when the deadly storm came through. (AP Photo/Branden Camp)

Jeff Waters, RMS meteorologist and product manager, RMS North America severe convective storm models, noted in a statement on Thursday that in some areas of the U.S., such as along the Georgia coast or in northern Florida, it was the first time such an outlook had been issued. “Indeed, it may end up being the second most active January for tornado activity since 1950,” Waters said.

“What this outbreak of severe storms demonstrates is that such events can cause substantial hazard and loss at any point in the year,” he said. “So, it’s imperative to understand severe convective storm risk as accurately as possible, including key drivers and uncertainties. While it’s too early to tell what this may mean for the upcoming severe weather season, RMS will monitor activity closely.”

US: Florida on alert after storms kill 19 nearby pic.twitter.com/C0F92EgGX4

RMS said in the statement that the outbreak of severe storms in the southern U.S. beginning on Jan. 19 has caused widespread damage in Georgia, Mississippi, Alabama, Florida, Arkansas, Louisiana, South Carolina and Texas, with reports of approximately 550 buildings damaged. Most of the reported damage has been caused by straight line winds, with additional damage due to hail.

RMS reported that damage assessments are currently being undertaken by the National Weather Service and local authorities, but “a clearer picture of the damage will likely take several days.”

The SPC has already issued a high risk warning of severe weather for northern Florida and Georgia for Jan. 22. It was the first “high risk” declaration in the U.S. since June 2014 and only the second in history to be issued in January, RMS said.

Storm over Gulfport, Miss. Are you out chasing storms? Show us your shots. (@AlexNorth8) pic.twitter.com/ee4dracOWh

According to RMS, January is the third-least tornadic month in the southern U.S. and although severe convective storm outbreaks during the winter months are common, large outbreaks with strong long-track tornadoes are rare (although not unprecedented). Damaging tornadoes have occurred in January in five of the 10 years preceding 2016. Earlier this month, an outbreak of severe storms caused major tornado damage in Georgia, Alabama, Mississippi, Louisiana, Texas and Florida.

On Wednesday, Ralph T. Hudgens, Georgia’s insurance commissioner, estimated US$100 million in property damage from recent storms and tornadoes that devastated parts of the state and resulted in at least 15 deaths. Hudgens said that “hundreds” of homes were damaged or destroyed.