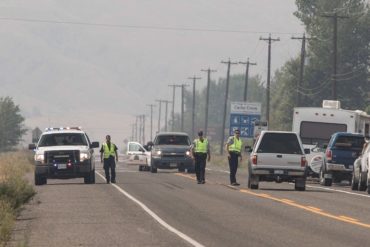 RCMP talk with travellers along the highway road block just outside of Cache Creek, B.C., on Tuesday, July 18, 2017. Residents were allowed back into their homes after being evacuated over10 days ago due to wildfires. The area is still blanketed with thick smoke from the wildfires burning in the Interior of the Province. THE CANADIAN PRESS/Jeff Bassett

The BC Wildfire Service said its weather forecasters have issued a wind warning for the fire-weary Cariboo Fire Centre, but no significant growth was reported early Friday on any area blazes.

Wildfire service chief information officer Kevin Skrepnek said almost 150 fires are burning in the province and communities will continue to be endangered without significant rain.

The service’s website shows 11 new fires broke out Thursday, seven sparked by lightning, two believed to be human-caused and two others undetermined.

Conditions also prompted expansion of an evacuation order for some homes in a remote area west of Quesnel. Orders were still in effect for some properties outside Williams Lake, and others around fires near Monte Lake, east of Kamloops, and north of Cache Creek.

To say it is a bit smoky in #Kamloops would be an understatement. #BCwildfires pic.twitter.com/bZNRvh3d0k

Officials said smoke must clear before growth of the blaze north of Cache Creek and east of Clinton can be accurately determined, but the wildfire service website estimates it at 680 square kilometres, with dozens of homes lost between Boston Flats and Loon Lake.

Near Monte Lake, 50 kilometres east of Kamloops, a young couple with two children confirms their home was destroyed when a quickly moving wildfire broke out late Wednesday afternoon.

Relatives of the family say they were away from home and had no opportunity to grab important papers or other items before flames raced up Martin Mountain.

A cause of that fire remains under investigation.

On Thursday, thousands of people were given the OK to return to their homes in and around Williams Lake, but the wildfire service reminded residents they may have to leave again on short notice.

Officials encouraged people to sign up for an electronic notification system so they can receive emails or text messages the moment an evacuation order is issued.

The wildfire service said $154 million has been spent so far on suppressing nearly 800 fires since April 1. (The Canadian Press, CHNL)

In past 3 weeks, #BCWildfires have forced 45,000+ people to flee their homes. @redcrosscanada is supporting authorities in relief efforts. pic.twitter.com/bZdPB6hmIg