Why brokers may face E&O exposure due to COVID-19

One prominent industry observer is “quite concerned” that brokers may be facing errors and omissions risk exposure due to COVID-19, especially if court decisions go a certain way.

For Phil Cook, chairman of Omega Insurance Holdings, the risk is that clients may try to hold their brokers responsible for not providing them with pandemic coverage, if indeed the courts determine that those policies would have provided some protection.

“It’s difficult at first glance to see that there’s a significant exposure there, but I’m quite concerned about the broker community — particularly if the courts start to determine that some of our policies covered certain things arising from COVID and some didn’t,” Cook said during his Industry Trends & Predictions: 2021 webinar, hosted by the Insurance Institute of Ontario.

If courts determine that options existed for pandemic coverage, but the broker didn’t place such protections for the client, the broker could be accused of failing their client. “So I can expect, I think, a significant number of E&O attempted claims [if that happens],” Cook said. “Whether the courts support them or not is another matter, but certainly a potential for E&O.”

Cook was giving his thoughts on what the upcoming year may bring. In raising broker E&O as a possible risk, he was speaking in the context of exploring possible P&C exposures due to COVID-19. Cook’s annual look at P&C industry trends was a virtual event this year. 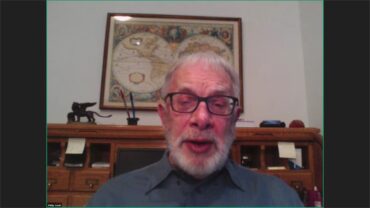 Phil Cook gives his predictions for 2021 during an Insurance Institute of Ontario webinar.

On the topic of directors’ and officers’ (D&O) liability, Cook predicts rates will continue to trend upwards, since many lawsuits are anticipated to target corporate executives. “The directors will be allegedly held responsible for not providing the kind of protection and avoidance of spread within their organization,” he said. “So D&O is going to be an expanding area of litigation.”

Business interruption, though not yet tested in Canadian courts, is another risk exposure due to the pandemic. “Obviously we’re all hoping that the courts will look at those issues objectively and we’ll come to a conclusion that is reasonably favourable to all parties, based on the wording itself,” Cook said.

He also highlighted potential risk associated with contingent business interruption, although he said he needed some direction to gauge its potential effect. These would include losses “due to breakdown in supply chain, due to audits for government,” Cook said. These would be examples of “secondary contingent business interruption, where there is clearly no direct damage to the business. And that, again, remains to be reviewed; remains to be legally challenged and determined.”

Along the same lines is consequential business interruption loss: Here, a business “could still have suffered a significant loss due to consumers or clients not wanting to go to those stores,” Cook said. However, “I don’t think we’ve seen even the beginnings of that part of the potential focus [and] it has to be the subject of a thorough and intelligent review by the courts.”

Cook also expects a number of loss claims when it comes to liability for failure to protect, as well as breach of regulations or government recommendations. With lockdowns happening across the country, and more stringently in Ontario and Quebec, clients may be subject of citations resulting in liability exposure for failing to follow regulations and recommendations.

Finally, in a risk that Cook described as “a scary one,” the industry could be exposed to courts finding coverage in policies where there was never any intent to provide coverage.

“There have been some decisions in the U.S. that have been based on purely a knee-jerk reaction on the basis of, ‘Well, they should have covered this,’” he said. “And hopefully our courts in Canada will look at those types of requests properly and will determine whether the wording itself supports that allegation or not. But if there is any attempt to rewrite our coverage retroactively, then our capital is definitely going to be at risk.”