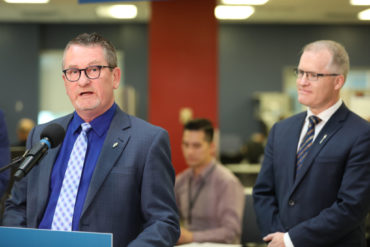 A third Canadian province has been given the go-ahead for electronic proof of insurance for drivers.

The Alberta government gave the OK for drivers to show their pink cards in a digital format through their smartphone this week, following the lead of Newfoundland and Labrador earlier this month and Nova Scotia last year.

“We’ve been at this for maybe a little more than five years,” he said, noting that the province has been through two elections in that timespan. “We felt really good about it. I think they’ve done it right and now we’ve got all kinds of insurance companies and other providers of digital proofs of insurance all lining up to get theirs out there, which is exactly how it should be.”

Insurance Bureau of Canada also welcomed the decision. “I think it a great step forward. It aligns with the experience consumers are getting in other industries. I think we still have a ways to go fully getting to that experience but this is a good first step,” IBC’s western vice president Celyeste Power told Canadian Underwriter. “We had it as one of our innovation and regulatory priorities. It was something we focused on pretty quickly with this government.”

The digital slip needs to come from the insurance broker or the carrier, so brokers need to ensure their customers aren’t taking a photo of their slip and expecting that to do the trick.

Hodgson pointed to a few platforms – one from the CSIO called My Proof of Insurance and another from Trufla Technology – that drivers can use to show proof of insurance, on top of any service provided through an insurer’s app.

The province sees it as a new notch in its attempt to reduce red tape, saying it allows for greater consumer choice and is safe, efficient and reliable as it eliminates the hassle of needing to carry and find a paper copy.

“We support their focus on cutting red tape, and we encourage them to continue along the path of improving how customers buy insurance, improving customer choice in the product they purchase, and lowering the premiums they pay,” Aviva Canada’s senior vice president of government relations Karin Ots told Canadian Underwriter. “Finally, we feel this is a great move for consumers because they deserve a workable and modern solution that is consistent with the experience they receive from many other industries.”

Not to mention the hassles it frees up for brokers, Hodgson noted. “Less paper is generally less work, right? It makes their job easy that way,” he said.

Electronic pink cards were one of the items the IBAA included in its recent white paper to the province to ease the tough times on the auto side. Now focus can shift to what Hodgson lists as his top two priorities: Dumping the 5% rate cap and getting equivalencies recognized, like the Canadian Accredited Insurance Broker and Chartered Insurance Professional designations, for licencing purposes in the province.

As for IBC, it hopes the momentum continues to other provinces. “We feel like it’s a win-win, so we’re hoping that it takes off across the country,” Power said. “I’m optimistic that we’ll see it in other parts of the country.”