Municipalities: another victim of the hard market?

Are Ontario municipalities another victim of the hardening market?

“A lot of municipalities are facing increased premiums or difficulty with obtaining insurance,” said Pino Cianfarani, partner at Lerners LLP, speaking at Insurance Bureau of Canada’s (IBC) Commercial Insurance Symposium Nov. 28. “In the opening remarks, we heard that some businesses are having trouble finding and keeping insurance and I would suggest that this is also being experienced by some municipalities.” 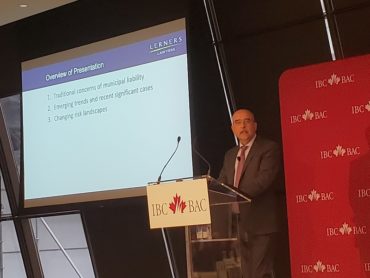 Cianfarani was referring to a comment by IBC president and CEO Don Forgeron that certain businesses, such as trucking companies and condominium corporations, are having trouble finding and keeping adequate insurance.

In the case of municipalities, one example is Bradford West Gwillimbury, which reported a 59% increase in insurance costs this year. Smaller municipalities are disproportionately affected, with per capita insurance costs in 2011 of $37.56 for communities with populations under 10,000, according to an Oct. 1 report from the Association of Municipalities of Ontario (AMO). By comparison, per capita costs in large communities in 2011 with populations over 75,000 were $7.71.

What’s contributing to this? “In part, joint and several liability is fueling exorbitant increases in municipal insurance premiums.”

Joint and several liability, colloquially known as the “1% rule” under the Negligence Act, says where damages have been caused or contributed to by two or more tortfeasors, the court has to determine their proportion of liability or degree of fault, Cianfarani explained.

For example, a defendant crosses the centre line on a road because he was driving in an unsafe manner and the road was a bit slippery. He hits the plaintiff head-on, who is rendered a quadriplegic. The defendant has a $1 million policy, but the plaintiff’s damages are somewhere between $7-10 million. “There are claims like this currently in our cabinets,” Cianfarani said. “There have been claims like this throughout my career at Lerners.”

That could mean the plaintiff could approach the municipality and ask them to pay the entire judgment of $10 million, or “I’m taking my $1 million from Mr. X. You need to pay $9 million even though you’ve been only found 10% liable for what occurred there.’”

The current Ontario government has indicated a commitment to review the joint and several liability rule, Cianfarani noted. Some consultations were held between July and September of this year. “The consultations are still ongoing and I understand that in the next couple months, we should be hearing something soon on that front.”

In its Oct. 1 report, Towards a Reasonable Balance: Addressing growing municipal liability and insurance costs, AMO argued there needs to be a rethinking of the 1% rule. “Municipalities are open to being responsible for their fair share of the liability exposure,” Cianfarani said, “but why should municipalities, and therefore taxpayers, be responsible for someone else’s liability?”

“It is entirely unfair to ask property taxpayers to carry the lion’s share of a damage award when a municipality is found at minimal fault or to assume responsibility for someone else’s mistake,” the report said. “The Negligence Act was never intended to place the burden or insurer of last resort on municipalities.”