KAMLOOPS, B.C. – Over 400 firefighters are working to contain the largest wildfire in British Columbia’s history. 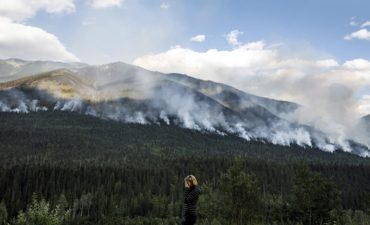 A women stops on the side of the highway to watch a forest fire burn near Revelstoke B.C. on Saturday August 19, 2017. THE CANADIAN PRESS/Jason Franson

Kevin Skrepnek of the BC Wildfire Service said 19 fires merged in an area west of Quesnel in the Interior, creating a single fire estimated to be 4,674 square kilometres in size.

Co-ordinating a response has been a challenge because the fire measures more than 130 kilometres from one end to the other, he said, adding 25 helicopters and 73 pieces of heavy equipment are being used.

“There’s good progress being made out there, but just given the sheer scale of this fire, it is going to be active for some time to come,” Skrepnek said.

It’s been decades since British Columbia has seen a fire anywhere near this big, Skrepnek said. The previous record was 2,250 square kilometres, set in 1958 by a fire burning in the northeastern part of the province.

Residents of several small communities have been forced from their homes by the giant fire, but Skrepnek said it’s still about 60 kilometres away from the nearest cities of Williams Lake and Quesnel.

Emergency Management BC said Monday that 3,800 people throughout B.C. remain displaced by wildfires and 9,700 others are on evacuation alert.

Officials at Cariboo-Chilcotin School District 27 said some schools will remain closed in September if they are located in areas where evacuation orders or alerts are in effect.

School buses will also not operate in areas that are under evacuation orders or alerts, the district said in a news release.

More than 1,060 fires have been sparked throughout B.C. since April 1, and about 10,000 square kilometres have been scorched by the flames.

There were 135 fires burning on Monday, including seven that started within a 24-hour period.

Crews fighting flames in the southern part of the province are getting some help from calm weather and seasonal temperatures, Skrepnek said, but there are indications conditions could change later this week as a cold front rolls through the region.

“We could potentially see these fires flare up if we get a relatively dry cold front with wind and potentially lightning, but it could also be bringing showers with it,” he said.