Economical Insurance posts net income of $5.3 million in 2017 Q1, down from $28.5 million in prior-year quarter

Auto lines, catastrophe and weather-related losses served as a drag on underwriting results which, in turn, contributed to Economical Insurance posting net income of $5.3 million in 2017 Q1 compared to $28.5 million in 2016 Q1.

“A number of measures, including improvements in pricing, underwriting and claims actions are being implemented, but will take time to be reflected in our results,” report Rowan Saunders, president and CEO of Economical Insurance.

The insurer’s consolidated financial results for the three months ended March 31, 2017 show underwriting loss for the first quarter of 2017 amounted to $37.8 million compared to a loss of $5.4 million in the prior-year quarter. 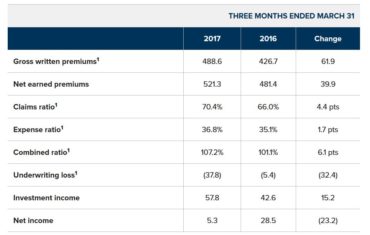 “Despite reforms to Ontario auto insurance, many insurers have recently filed or implemented rate increases to address rate deficiencies in this line of business,” the insurer points out.

“To address these challenges, we are implementing a number of measures, including improvements in pricing, underwriting and claims actions. However, these measures will take time to be reflected in our results,” it adds. 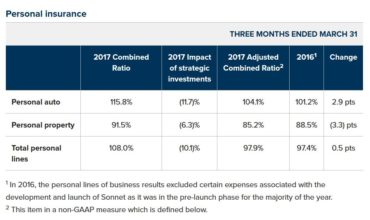 “We continue to make significant investments in Sonnet and the replacement of our personal lines policy administration system, which impacted the combined ratio by 6.5 percentage points compared to 2.5 percentage points in the same quarter a year ago,” it states.

“We expect that these strategic investments will continue to increase operating expenses during the implementation and start-up phases, but are expected to improve our operational efficiency and profitable growth in the longer term,” it predicts.

Results were more positive on the premium front. With regard to net earned premium (NEP), it measured $521.3 million compared to $481.4 million.

For gross written premiums (GWP), a combination of organic and inorganic growth resulted in GWP of $488.6 million in 2017 Q1, up 14.5% over $426.7 million in 2016 Q1. The result was “driven by strong personal lines growth, including contributions from Sonnet and Petline,” which serves the Canadian pet insurance industry.

“Personal lines premiums grew by $53.3 million or 20.5% primarily due to increased auto policy volumes in our broker channel, our digital direct distribution channel, Sonnet, and the acquisition of Petline,” Economical Insurance notes.

Commercial lines premiums, for their part, “grew by $8.6 million or 5.2%, driven by targeted rate increases for commercial property and liability, and increased fleet business,” the company points out.

“Decreases in favourable claims development and increased catastrophe losses were largely offset by a decrease in large losses, a decrease in the expense ratio and the beneficial impact of increased rate resulting from our underwriting and pricing actions,” notes the company statement. 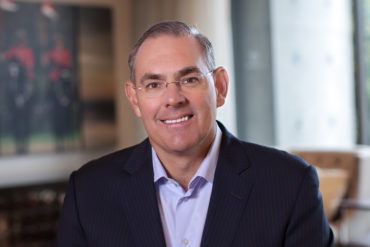 Other results for the first quarter of 2017 include the following: