Homes more resistant to ignition by embers had improved survival in Fort Mac wildfire, “luck” not a factor: ICLR report

Surviving homes in otherwise decimated neighbourhoods of Fort McMurray hit by this spring’s massive wildfire were more resistant to ignition by embers, notes a preliminary report issued by the Institute for Catastrophic Loss Reduction (ICLR).

Home survival is not random or a function of luck, emphasizes Alan Westhaver – principal of ForestWise Environmental Consulting Ltd. who was commissioned by ICLR to carry out a forensic audit following the wildland/urban interface fire. 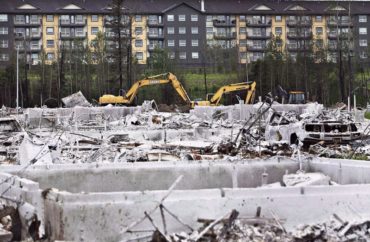 Crews work to clean up the wildfire destruction in Fort McMurray Alta., on June 24, 2016. Canada Mortgage and Housing Corporation is predicting a house-building boom in wildfire-ravaged Fort McMurray, Alta., later this year and continuing into 2017. THE CANADIAN PRESS/Jason Franson

“Whether a home is destroyed by an interface wildfire or not greatly depends on conditions immediately around the structure, the area for which homeowners are responsible,” Westhaver maintains in an ICLR statement issued Monday.

Information contained in Why some homes survived: Learning from the Fort McMurray wildfire disaster, was gathered May 19 to 28 in urban neighbourhoods at the forested “interface” fringes of the city, and at forested acreages nearby.

Westhaver discounted direct contact from flames or radiant heat as being significant sources of home ignition, reports ICLR, an independent, not-for-profit research institute based in Toronto and at Western University in London, Ont.

Instead, he concluded that “wind-driven embers were the most probable cause for the majority of early home ignitions in the areas where the fire made its transition from forest into urban neighbourhoods,” notes the ICLR statement.

“Once established, the fire would have spread from structure to structure as an urban conflagration, accounting for the majority of home losses,” the report adds.

The research shows “communities are lost when embers ignite fuel immediately surrounding or on structures. Once a few structures ignite, then building-to-building spread leads to an urban conflagration, as we experienced in Fort McMurray,” says Glenn McGillivray, managing director of ICLR.

Protection against the fire was “largely due to actions and decisions taken by homeowners who had adopted FireSmart mitigation measures to a greater degree than the owners of adjacent homes who did not take such actions,” ICLR points out.

The Fort Mac wildfire, which destroyed more than 2,400 structures, represents the largest-ever insured loss in Canada.

The wildland/urban interface disaster sequence demonstrated by the fire “can be broken, and catastrophic home losses can be prevented. However, this depends on widespread adoption of risk mitigations within the home ignition zone,” the report emphasizes. 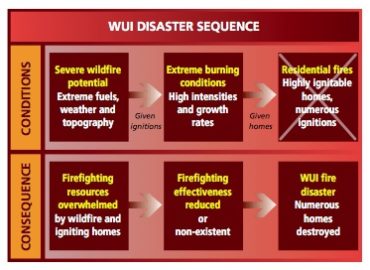 “Therefore, it is speculated that if homeowners became more aware of how homes ignite and better understood how and why simple FireSmart measures work, they may be better motivated to correct weaknesses in wildfire defences. A communication tool for raising public understanding is suggested,” it adds.

The growing concern over wildland/urban interface fires “are stoked by the converging trends of climate change, increasing forest fuels, and expanding residential/industrial development,” the report notes.

All reliable indications point to the probability that these fires “will become more frequent, and the occurrence of catastrophes of ascending magnitude in Kelowna (2003/$200 million), Slave Lake, Alta. (2011, $750 million) and Fort McMurray, Alta. (2016, $3.6 billion) would seem to bear this prediction out.”

Some of Westhaver’s early results include the following:

“In all neighbourhoods studied, homes whose owners had adopted FireSmart guidelines survived much more frequently than homes where they had not, despite the extraordinarily harsh conditions,” Westhaver comments.

FireSmart guidelines are effective in reducing the probability of home ignition and wildfire losses, he says. And while low total hazard rating is important, a single critical weakness can lead to home loss. 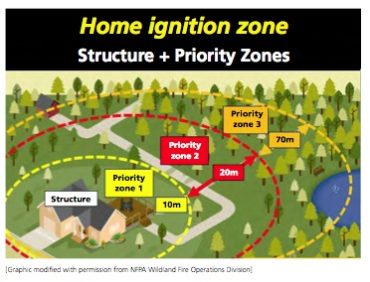 “The findings of this study will require many people to rethink how at risk communities are protected from major interface fires,” McGillivray believes.

“It is not about thinning the forest, or building more fire breaks, or doubling, tripling or quadrupling fire suppression efforts. It essentially begins and ends directly in the backyards of homes,” he comments.

“Get rid of the fuel immediately surrounding the home and you have a much better chance of that home surviving,” he emphasizes.

“Wildland/urban interface fires are neither a traditional forest fire scenario, nor a structural fire scenario. They are a distinct emergency, which carries challenges and dangers not known to other forms of fire,” states the report. “Therefore, distinct solutions matched to the problem are essential.”

Among the things that set apart such fires are the following:

“The primary reason for the scale of loss associated with wildland/urban interface fire disasters are conditions within urban areas that allow for the ignition of structures from the flames or embers of the wildland fire. Such conditions are largely preventable, and, logically, it follows that wildfire losses may also be reduced,” the report contends.

Available free at www.iclr.org, the report is intended to facilitate more fulsome deliberations among public officials regarding policy, regulations, standards and programs affecting wildfire risk management, as well as to provide a stronger basis for sound decision-making.

Findings are based on on-site visual inspections made from the perimeter of surviving and burned homes, and observations collected from five distinct situations identified within impacted neighbourhoods. Systematic hazard assessments were also performed on about 85 homes and their adjacent properties using recommended FireSmart guidelines as the criteria.

Susceptibility of a home to wildfire ignition is evaluated by examining 16 hazard factors relating to characteristics of the structure itself, vegetation and other combustible objects surrounding the home. Factors are summed to provide an overall rating of wildfire risk to each home, the report explains.

In his preliminary conclusions, Westhaver notes that “home survival is a ‘cumulative’ issue, whereby it relies on the net effect of compliance with multiple hazard factors that each contribute to a home’s resistance to ignition by wildfire.”

He further concludes there is no single hazard factor, or group of factors, that is to say a silver bullet, that can override all others to ensure home survival during a wildfire event.

“Data gathered during this investigation could be useful to answer additional inquiries by developers, builders, municipal planners, homeowners, insurers and others,” notes the report. Examples of future applications or queries of the data are as follows:

The final report will drill further into the data to determine the spatial distribution of hazard with increasing distance from homes, assess home vulnerability according to each of the rated hazard factors, further evaluate aspects of wildland fire behavior with regards to home ignitions in various neighbourhoods, and test other theories of wildfire risk mitigation.

Recommendations forthcoming in the final report – anticipated for the fourth quarter of the year – will not pertain specifically to the Fort McMurray disaster, the Regional District of Wood Buffalo, or the City of Fort McMurray.

Rather, they will be strategic, with the goal being to prevent or lessen losses from wildland fires nationally.

Beyond additional conclusions related to home survival, the final report will yield important conclusions relevant to many other FireSmart topics and disciplines, including the following: