MONTREAL – Quebec’s public security minister says new measures to assist flood victims who feel they’ve been abandoned by the province will help them cut through the bureaucracy. 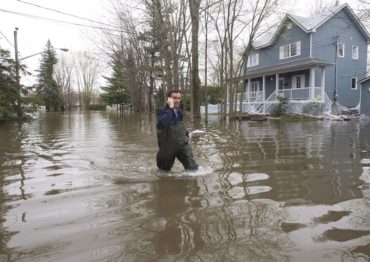 A man makes his way through the flooded streets in Laval, Que., on Wednesday, May 10, 2017. Even as swollen rivers have receded in Quebec, some experts suggest historic flooding this year could mean critter and pest-related woes in months and years to come. THE CANADIAN PRESS/Ryan Remiorz

Martin Coiteux was in Montreal on Tuesday to announce personalized meeting days will be held with affected residents, allowing them to meet directly with municipal and provincial representatives to deal with their cases.

Several dozen people attended a rally on Montreal’s West Island on Sunday to protest the government’s response to the floods this past spring.

Many said they haven’t received any financial assistance and are having trouble getting information on the status of their files.

Coiteux, who is also municipal affairs minister, said the extent of the disaster left resources at all levels overwhelmed.

Agreements will be concluded with the Red Cross to help people requiring temporary housing, he added.

Presently, 278 families are still living in hotels and while the province doesn’t have exact figures, just as many are believed to be living temporarily with relatives or at rental properties.

Out of $350 million the province set aside for reconstruction, only $35 million has been doled out so far.

“We admit that things aren’t perfect and need to be improved, and we’re acting,” Coiteux said.

“Even though great efforts have been made by the government – as almost 100 new agents were added to meet the multiple demands – it is now obvious that we need to do more.

“Those affected by the floods aren’t well-informed of the next steps and get confused sometimes in the process with the different levels of government involved.”