Mining and wood products are among the industries affected by wildfires in British Columbia’s interior, where a state of emergency is in place. 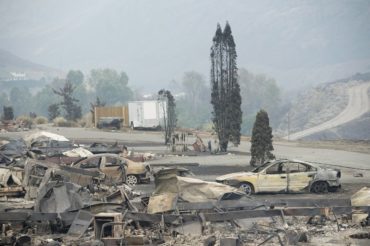 The area of Boston Flats, B.C. is pictured Tuesday, July 11, 2017 after a wildfire ripped through the area earlier in the week. THE CANADIAN PRESS/Jonathan Hayward

Imperial Metals Corp. announced Wednesday that an open pit copper/gold mine 56 kilometres northeast of Williams Lake continues to be affected by the disaster.

That mine, operated by Imperial Metals subsidiary Mount Polley Mining Corporation, “remains operational, with milling and mining operations continuing at rates proportional to the amount of employees able to report to site,” stated Vancouver-based Imperial Metals in a release.

“Should employees or critical supplies such as fuel not be available due to road closures, the mine may be forced to suspend operations,” added Imperial Metals.

“West Fraser is uncertain how long our 100 Mile House, Williams Lake and Chasm operations will be suspended and is unable to assess the impact on lumber and plywood production,” stated the Vancouver-based firm, which earlier reported sales of $4.45 billion in 2016.

“The wildfires continue to threaten the homes of many employees of the Mount Polley mine site who live in Williams Lake and surrounding areas,” Imperial Metals stated Monday.

Three days earlier, the B.C. government said it was declaring a provincial state of emergency and that on July 7 alone, there were “56 new wildfire starts throughout the province.” The province issued evacuation orders for Ashcroft, Cache Creek, Princeton,105 Mile House and 108 Mile House.

The wildfire in 2016 affecting Fort McMurray, Alberta was the more expensive natural disaster, when measured by insured losses, in Canadian history, at nearly $4 billion.

Before the summer of 2013, Canada’s second costliest natural disaster – at $700 million – was the Slave Lake, Alberta wildfire, next at the time to the January, 1998 Eastern Canada ice storm. It has since been knocked to fifth place, due to two 2013 events, (June floods in Alberta and a July 8, rain storm in Toronto) and the Fort McMurray wildfire.

At the time, McGillivray was moderating a panel discussion titled Wildfire Risk Management.

“Even in today’s world that is starting to be affected by climate change, there is a lot we haven’t really started to acknowledge, as risk managers in proper way,” said Balz Grollimund, head of treaty underwriting for Canada and English Caribbean at Swiss Reinsurance Company Ltd., on April 25 at Financial Affairs Symposium.

“Take for example wildfire,” Grollimund said at the time. “We don’t really have any meaningful way of modelling wildfire today, globally speaking.”

The event was held at the Design Exchange in downtown Toronto.

“The unmodelled perils that we have seen have had significant economic and insured loss impact over recent years,” said Mazdak Moini, Aviva Canada’s vice president of commercial lines and reinsurance, April 25 at the Financial Affairs Symposium.  “If you rewind the clock to 2013 there were no commercially available flood models for Canada. There are now but there are also no commercially widely available wildfire models.”