Non-profit organizations need to be prepared for natural disasters so they can help deliver public services, speakers suggested Tuesday at the World Conference on Disaster Management. 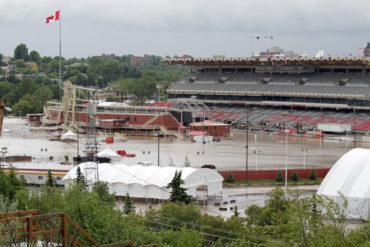 From research conducted after the floods in affecting southern Alberta in 2013, the Calgary Chamber of Voluntary Organizations found that fewer than 50% of non-profit organizations “actually had business continuity plans in place,” said Matt Sawatsky, emergency preparedness coordinator for CCVO.

One part of a CCVO project involves helping non-profits prepare themselves for an emergency, Sawatsky suggested during a presentation Tuesday at the World Conference on Disaster Management.

The presentation was titled Better Together: A Case Study in Cross-Sector Collaboration. Grogan alluded to the fact that as of June, 2013 the floods affecting southern Alberta was the most expensive natural disaster in Canadian history, when measured by insured losses.

“Whether or not Fort McMurray tops that, we will see,” Grogan said, referring to last month’s wildfire.

The World Conference on Disaster Management was held June 7-8 at the International Centre in Malton, Ont., across the road from Toronto International Airport.

Grogan told attendees that about 100,000 people were evacuated as a result of the June, 2013 floods in southern Alberta, which caused about $6 billion in economic losses.

“It was a very localized event,” Grogan said of those floods, adding that most parts of Calgary were unaffected and there was a “huge outpouring” of volunteers to help.

“Our job in the floods was to monitor the impact on the non-profit sector,” Grogan said, adding that CCVO conducted surveys, case studies and focus groups after the disaster.

“In the immediate days after the floods we saw an increased demand for client services,” Grogan said. “Two years after the flood we are still seeing post-flood impacts in the community.”

Sawatsky said Calgary has “some very large scale, too-big-to-fail non-profits,” such as The Calgary Drop-in Centre, which says it has the capacity to house about 1,250 people per night. Calgary has a total of about 6,000 non-profit organizations, Sawatsky notes.

CCVO is one organization supporting Emergency Preparedness Initiative of Calgary, which operates a website, getpreparednonprofit.com. That site provides resources to non-profit organizations and has a business continuity planning template, Sawatsky said at the World Conference on Disaster Management.

“One of the things that I actually heard at this conference was the reference to the silos between business continuity planning and emergency management, and what we found at a community level is there cannot be those silos,” Sawatsky said. “One of the things we found was when we looked at the coordination silos was when we looked at the non-profit community sectors, if they do not prepare themselves to respond, they cannot assist the public sector.”

There is a “common misperception” that all workers for non-profits are volunteers, Grogan said.

“The governments are trying to move out of that space, especially social services, that used to be delivered by government,” Grogan said. “That is happening in many parts of the western world. It puts a system in place, beside government, that many of those services are now run by non-profits.

“They are basically the networking hubs in Calgary where citizens will come in the event of an emergency, just naturally because that’s where their community events are hosted,” he said. “They were more than willing to open their doors and assist people and respond but there really were no pre-arrangements made for these organizations and there wasn’t even a thought of how we deal with funding arrangements.”

More coverage of the World Conference on Disaster Management