Transporters of liquid petroleum products in British Columbia now will need to have provincial plans in place to manage a spill, the province’s Ministry of Environment and Climate Change Strategy announced on Friday. 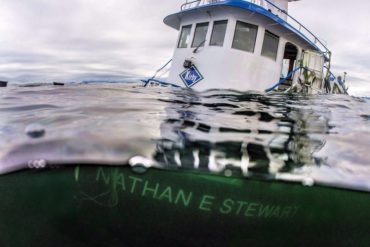 The tug boat Nathan E. Stewart is seen in the waters of the Seaforth Channel near Bella Bella, B.C., in an October 23, 2016, handout photo. A rich marine harvest ground for a First Nation near British Columbia’s Great Bear Rainforest remains closed to shell fishing one year after a tug ran aground, spilling more than 100,000 litres of fuel into Seaforth Channel. Chief Marilyn Slett of the Heiltsuk First Nation in the small community of Bella Bella said Thursday that the sinking on Oct. 13 last year of the 30-metre tug Nathan E. Stewart has had devastating social, cultural and economic impacts on her people. THE CANADIAN PRESS/HO-Heiltsuk First Nation, April Bencze, *MANDATORY CREDIT*

The new regulations requiring spill preparedness apply to pipelines, as well as rail and trucking operations transporting more than 10,000 litres. The regulations also extend liability for full cost of response and recovery to a combination of both the owner as well as the transporter of the substance, the ministry explained in a statement.

They will take effect at the end of the month, the Canadian Press said on Friday.

Transporters will be required to have contingency plans in place before product is moved, and anyone who causes a spill can now be directed by the province to develop and implement a recovery plan, the statement said. Recovery plans outline the work that is required following the initial response to an incident to ensure environmental damage is fully addressed.

To address situations like the Nathan E. Stewart spill off Bella Bella – where product spilled in October 2016 from a marine vessel impacting seabeds and shoreline under provincial jurisdiction – the province is considering future regulations that could require full compensation for First Nation, community and provincial response and recovery efforts, the ministry reported.

On Oct. 13, 2016, the Nathan E. Stewart tug ran aground with 220,000 litres of fuel onboard and sank about 20 kilometres west of Bella Bella, the Canadian Press reported in late October of that year. It was initially unclear how much fuel spilled into the ocean, but the Canadian Press later said that salvage crews removed more than 23,000 litres of diesel.

Spill response legislation to establish new requirements and create new offences and penalties was passed last year. This first set of new regulations passed by the current government activates that legislation, and contains provisions that:

The new regulations were developed with input from industry, First Nations, local communities, and other federal and provincial agencies.

“These initial regulations increase responsibility, transparency and accountability for those who own as well as transport potentially dangerous products through our province,” said George Heyman, Minister of Environment and Climate Change Strategy, in the statement. “Our government will continue to develop a robust spill prevention, response and recovery program that improves initial response standards, and complements the federal marine spill regime to protect our coastal waters.”