The wildfires in California have cost US$1.045 billion in losses, preliminary data from the California Department of Insurance has revealed. 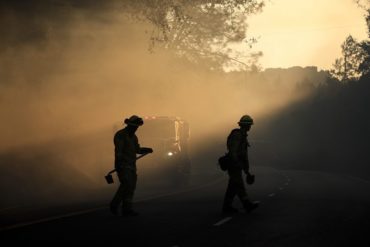 Two firefighters watch for spot fires Friday, Oct. 13, 2017, near Calistoga, Calif. Firefighters gained some ground on a blaze burning in the heart of California’s wine country but face another tough day ahead with low humidity and high winds expected to return. (AP Photo/Jae C. Hong)

On Thursday, California Insurance Commissioner Dave Jones announced preliminary data provided by eight California insurers processing claims for tens of thousands of policyholders, the insurance department said in a press release. While the numbers are expected to climb as more claims are filed and processed, the preliminary data reflects US$1.045 billion in losses, commercial and residential structures, personal and commercial vehicles and agricultural equipment.

“These numbers are just the beginning of the story as one of the deadliest and costliest wildfire catastrophes in California’s history,” Jones said. “The tragic death of 42 people and over a billion in property losses are numbers – behind these numbers are thousands of people who’ve been traumatized by unfathomable loss. We must do all we can to ease their pain and help them recover and rebuild.”

With more than 7,000 structures damaged or destroyed, residents in several counties across northern and southern California are leaving evacuation centres to assess their losses, the release noted.

Last week, Jones issued a notice to P&C insurers and asking them to expedite claims by “cutting through red tape and doing all they can do to help policyholders who are likely to have little or no documentation that insurers normally require.”

Jones also signed a “declaration of emergency situation,” which allows insurers to tap out-of-state claims adjusters from their other offices, effectively expanding their claims adjuster workforce. With “tens of thousands of claims, this is an important step in increasing the claims processing capacity for insurers and helping speed the recovery and rebuilding process,” he said in the release.

The Associated Press reported on Thursday that 22 of the 42 deaths in California’s October fires happened in a Sonoma County wildfire, making it the third-deadliest in California history. A 1933 Los Angeles fire that killed 29 people was the deadliest, followed by the 1991 Oakland Hills fire that killed 25. When adjusted for inflation, the Oakland Hills fire is believed to be the costliest fire in California history at US$2.8 billion, the Associated Press reported. It destroyed about half as many homes and other buildings as the current series of fires.

The California Department of Forestry and Fire Protection (CAL FIRE) said that as of Friday, nearly 10,000 firefighters are still battling nine large wildfires. More than 7,700 structures have been destroyed.

The California Department of Insurance is also monitoring the Santa Cruz fire that broke on Monday and threatens more than 300 homes. The Associated Press reported that the wildfire in steep and rugged terrain had grown to nearly half a square mile (1.3 square kilometres). Several firefighters have suffered minor injuries.