While residents of Mendocino County have been allowed to return home after deadly wildfires destroyed property in California, AIR Worldwide is warning the situation “remains extremely volatile” in the region. 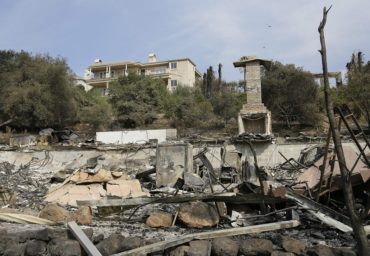 A house stands intact above one that was destroyed by wildfire near Atlas Peak Road Monday, Oct. 16, 2017, in Napa, Calif. State and local officials say they are trying to get people back into their homes, but they cautioned that it could take days and even weeks for neighborhoods hard hit by Northern California wildfires. (AP Photo/Eric Risberg)

As winds moderated on Sunday, “firefighters were able to make progress toward containing the 15 large wildfires active across California,” stated AIR Worldwide, a catastrophe modelling provider owned by Verisk Analytics Inc., in a release Monday.

“Although winds have died down temporarily and light rain is forecast for the region later this week, the situation remains extremely volatile,” added AIR Worldwide. “Fire officials have warned that even suppressed wildfires can behave erratically, projecting embers some distance to ignite new blazes; fire continues to threaten the outskirts of Sonoma.”

The Associated Press reported Tuesday that wildfires burning in northern California for the past week have killed at least 41 people and destroyed nearly 6,000 homes. AP reported Monday that 8,000 people evacuated from homes in Mendocino County have now been allowed to return but that evacuees in other counties, including Napa and Sonoma, are still waiting for permission to return. AP reported Sunday night that the number of those under evacuation orders was down to 75,000 from nearly 100,000 the day before.

“Scientists expect an increase in both the frequency and the severity of wildfires as a result of climate change, with warmer and drier climates providing favourable conditions for burning,” Swiss Re reported in a sigma report – Natural catastrophes and man made disasters in 2016 – released in early 2017. “Insured losses from wildfires have been growing since 1980, and this is likely to continue as exposures in wildfire-prone regions continue to increase given expanding populations, the building of more property and infrastructure, and the possible effects of changing climates such as warmer and drier seasons.”

The American southwest and California “have become drier over the past century as well due to Earth’s changing climate, increasing the probability of severe wildfires occurring,” stated Mark Bove, Munich Reinsurance America’s senior research scientist, underwriting services, in a release Oct. 12. Bove warned at the time that “prime wildfire conditions” may continue in California this winter.

“Over the past decade, the United States has seen an uptick in the frequency of wildfires that have caused significant insured property losses,” added Bove.

Wildfires in the United States, Canada and Australia, “account for the great majority of fire-related losses globally,” Swiss Re said in Natural catastrophes and man made disasters in 2016. The fire affecting Fort McMurray, Albert placed sixth on Swiss Re’s list of the most expensive insured losses of 2016. Topping the list was the earthquake in April, 2016 affecting Japan, with about US$4.9 million in insured losses.

“How a property is landscaped is absolutely key to mitigating the impact of wildfire,” Glenn McGillivray, managing director of Canada’s Institute for Catastrophic Loss Reduction, said Oct. 5 during a presentation at the 44th Annual Engineering Insurance Conference (AEIC), produced by the Canadian Boiler & Machinery Underwriters Association. McGillivray reported at the time that that flammable shrubbery, wood chips and wood mulch can catch fire and that if property owners “can prevent embers from igniting on the property, immediately around the property and catching something,” then there is a “good chance” of saving the property.