The Canadian property and casualty insurance industry had underwriting income of $484 million in 2016, down 81% from $2.554 billion in 2015, while reinsurers’ combined ratio deteriorated 30.4 points year over year, MSA Research Inc. suggested in a report released Tuesday. 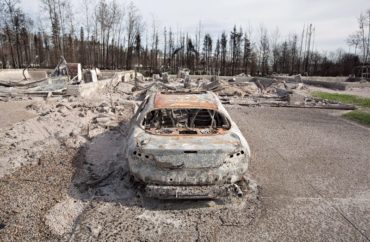 A burned out car sits in the Thickwood neighbourhood of Fort McMurray Alta, on Friday, June 3, 2016. Members of the community are now being allowed back into their homes. THE CANADIAN PRESS/Jason Franson

Industry loss data from the wildfire in May in Fort McMurray, Alberta “came in at around $3.7 billion” excluding loss adjustment expenses, wrote Stewart McIlwraith, senior vice president and head of insurance for DBRS Ltd., in the most recent MSA Quarterly Outlook Report.

McIlwraith was quoting both from DBRS and Catastrophe Indices and Quantification Inc. (CatIQ), a sister company to MSA Research.

The “overall financial impact” of the wildfire in 2016 “could be as high as” $9.5 billion, including lost work hours, Swiss Re Ltd. said in its Sigma report released March 28.

“The Canadian insurance industry was put through the wringer in 2016,” MSA Research chief executive officer Joel Baker wrote in the MSA Quarterly Outlook Report for Q4-2016.

Insured losses for all CAT and “notable events” in Canada were $5.3 billion in 2016 based on latest estimates, McIlwraith wrote in his article in MSA’s outlook report, quoting from CatIQ, which defines catastrophes as events that exceed $25 million in losses and notable events as those with losses between $10 million and $25 million.

On July 6, 2016, CatIQ and Insurance Bureau of Canada announced that CatIQ’s initial estimate of insured losses from Fort McMurray were $3.58 billion. CatIQ’s estimate takes into account losses before reinsurance.

The wildfire resulted in the evacuation of about 88,000 people – including the entire city of Fort McMurray – on May 3, Verisk Analytics Inc.’s Property Claims Services said in a report released in August, 2016. At the time, PCS estimated insured losses from Fort McMurray were $4.67 billion.

“The reinsurers are the ones shouldering a good portion of it,” added Silverthorn, who made his remarks Nov. 10 at A.M. Best’s annual Insurance Market Briefing Canada in Toronto.

During the CatIQ Canadian Catastrophe Conference (C4) Feb. 2, 2017, Glenn McGillivray, managing director of the Institute for Catastrophic Loss Reduction, alluded to wildfires in Kelowna in 2003 and Slave Lake in 2011.

“Even despite those two big fires, the Canadian insurance industry never really concerned themselves with wildfire,” McGillivray said Feb. 2 while moderating a C4 session, titled Wildfire Risk Management, at the Allstream Centre, the former automotive building at the Canadian National Exhibition grounds in Toronto.

“We are the third most forested country in the world,” McGillivray said during C4. “We have probably billions if not trillions of assets in the wildland-urban interface and deep in the woods.”

A “lot of” the “burden” of the Fort McMurray wildfire “was placed on the reinsurance market and in particular that global reinsurance market,” said Susan Molineux, senior financial analyst specializing in reinsurance for A.M. Best, at the ratings firm’s market briefing in Canada Nov. 10.

Europe-based reinsurers were estimated at the time to have covered “a little less than half of the loss” from Fort McMurray, with Bermuda-based reinsurers covering about 25%, Molineux suggested.

During a news conference July 6, 2016, IBC vice president Bill Adams said the flooding affecting southern Alberta in 2013 caused economic losses of about $6 billion. However, only about $1.7 billion of that was covered by insurance due to exclusions in home insurance policies for overland flooding, Adams added last year during a news conference.

Still, the 2013 flood was the most expensive natural disaster by insured loss in Canadian history, until the Alberta wildfire in 2016. The the ice storm affecting eastern Canada in early 1998 placed second. Taking third place was a July 8, 2013 rain storm that affected the Toronto area and cost the industry about $1 billion.

Before the summer of 2013, the 1998 ice storm was the most expensive natural disaster in Canadian history, while  the 2011 Slave Lake wildfire placed second, Alberta, Property and Casualty Insurance Compensation Corporation said earlier. Taking third spot, until 2013, was an August, 2005 rain storm affecting the Toronto area that resulted in the collapse of the Finch Avenue bridge over Black Creek.

Brokers “must be vigilant to ensure client coverages are appropriate, especially if the next big one is a water event rather than fire one,” Baker wrote in the MSA Quarterly Outlook Report released April 18.

In MSA’s quarterly outlook report for Q1 2015, Baker suggested that personal lines brokers will not want to risk errors and omissions exposure “by not offering flood cover when it is available” to residential property clients. Baker was commenting on the time on Aviva Canada and The Co-operators announcements that they would offer overland flood coverage.