There is a need to formalize the role that government can play in helping to manage the financial impact of a “mega cat,” speakers suggested on Wednesday at the Canadian Insurance Financial Forum (CIFF) in Toronto. 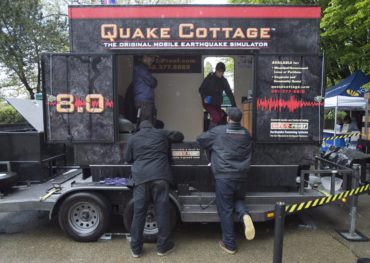 People experience what a earthquake would feel like as they stand inside a earthquake simulator in Vancouver, B.C. Tuesday, May, 5, 2015. THE CANADIAN PRESS/Jonathan Hayward

“We are well-capitalized for a big event, the question is, is it enough?” asked Lapo Calamai, director of catastrophic risk & economic analysis with the Insurance Bureau of Canada (IBC). “What if we are faced with an even bigger event?”

Calamai used the example of the massive earthquake that struck Japan in 2011. “We realized our understanding of seismic science is rather limited and our expectations can be blown away at any point,” he told conference attendees. “Nobody in the scientific seismic community back then thought that the earthquake was even remotely possible, it didn’t fit any model.”

Within months, Calamai said, the Office of the Superintendent of Financial Institutions ran a stress test to estimate the impact of an earthquake generating $30 billion in losses by looking at a British Columbia Cascadia event. “And the 30 billion threshold was just above what we were capitalized for at the time, since industry [profit and losses] at the time in 2012 was 27 billion give or take,” Calamai said during the session, titled Mega Cat Risk – Can the Industry Cope with the Aftermath?. “What they found is that a third of the market would become insolvent in that kind of a scenario and 55% of insurers would fail to meet their [minimum capital test] requirements.”

Paul Kovacs, president and CEO of the Property and Casualty Insurance Compensation Corporation (PACICC), said that the corporation’s own research, released in 2013, found that in the event of a 15-billion dollar earthquake claims event, “things would go fine.” Somewhere between a 15 and 30 billion dollar earthquake, some insurers would go insolvent and PACICC would have to step up to look after the consumers of those companies. (PACICC is funded by Canadian P&C insurers so that in the unlikely event of the collapse of an insurer, PACICC responds to the claims of policyholders under most policies. Kovacs said that 32 P&C companies have been closed by regulators since 1979; most failed due to “pricing and reserving.”)

“When we got up to a 25 billion dollar insurance claims event, we think we could cope with it, but it’s kind of rough,” Kovacs said, noting that PACICC would need to collect $2.4 billion from the industry, which would take three years, to cope with such an event. “Thirty billion was the limit we thought was beyond what the industry could cope,” he said, adding that such an event was “extremely unlikely.”

Kovacs said that PACICC has come up with a different result now “and when we’re ready, we’ll talk about what the new data shows.”

Added Calamai: “Those numbers are entirely out of data… but the underlying logic hasn’t changed or has it? Try to put an absolute dollar number on those critical threshold triggering insolvencies is something that as risk managers we out to be doing. Can we handle a 30 billion dollar earthquake? Or is it 25? Or is it 45?”

Whatever the result, Calamai continued, “the accuracy of the intellectual exercise is somewhat beside the point. The point is, whatever the threshold, our capitalization is limited.” To that end, there is a key role for government to play in co-managing the tail portion of earthquake risk, he said, pointing to Japan, where government shares earthquake risk with private insurers in layers. “For very large losses events,” Calamai said, “the tail end of the liability is picked up by the government. Both in the case of Japan and the U.S., there is evidence to suggest that not only does this help maintain a strong and vibrant insurance market that was otherwise unsustainable… the consumers ultimately benefit from this in the form of higher take-up and lower premiums.” 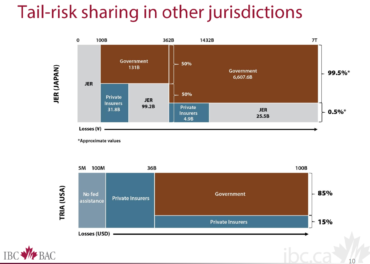 In Canada, Kovacs said, the government would have a variety of options, including issuing cat bonds for itself. “We’re looking to try to formally get the government to acknowledge that at some point, there is a role that they have to step in and play and define what that is and have it ready now instead of creating it in the middle of a catastrophic event,” he said. “If we get beyond what the industry can handle, the government is going to have to get involved.”

Also speaking during the session, held at the Allstream Centre, was Carolyn Rennie, managing director of Catastrophic Indices and Quantification Inc. (CatIQ). She discussed the ongoing Fort McMurray wildfire. “The worst possible [scenarios] that have been modelled for our industry are talking about billions of dollars and Fort McMurray is an affirmation,” Kovacs added. “It’s unlikely to be tens of billions of dollars, but the worst possible earthquake could be tens of billions of dollars up to a hundred billion dollars is conceivable. It’s possible, incredibly unlikely, but possible.”