The Fort McMurray wildfire accounted for 98% of first-half insured catastrophe losses in Canada and 29% of Property Claim Services (PCS)-designated North American cat losses for the period, according to a preliminary estimate from the company. 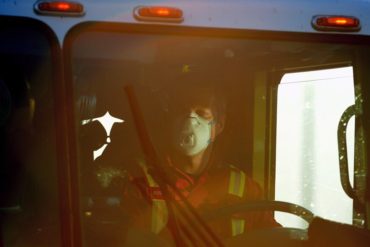 FILE – A firefighter wears a mask as he drives his truck pass a road block 16kms south of Fort McMurray, Alta., in a May 6, 2016, file photo. THE CANADIAN PRESS/Jonathan Hayward, File

Insurers affected by the event estimate approximately 39,000 total claims, with an average payment of more than $120,000, PCS said in the report, titled Texas and Alberta: PCS Q2 2016 Catastrophe Review.

“Although all eyes have been on the Fort McMurray wildfire event – the largest catastrophe event in the history of the Canadian market – overall catastrophe activity was quite high in the second half of 2016,” said the report, released on Wednesday.

PCS designated four events – two in the first quarter and two in the second – with aggregate insured losses of $4.7 billion. The two first-quarter events were quite small, the report said, resulting in aggregate insured losses of $64 million in three provinces: New Brunswick, Ontario and Quebec. Personal losses accounted for 83% of the Q1 total, followed by commercial at nearly 13% and auto at almost 5%.

With 98% of H1 insured cat losses in Canada and 29% of PCS-designated North American cat losses, “the sheer magnitude of the Fort McMurray event certainly affected year-over-year changes in insured catastrophe losses in Canada,” the report said. “In the first half of 2015, two second-quarter events in Alberta and Saskatchewan resulted in insured losses of $56 million, rendering the year-over-year analysis almost irrelevant. Even with two quarters remaining in the year, 2016 has the highest annual catastrophe loss since the inception of PCS Canada in 2010.”

While PCS’ re-survey estimates $4.67 billion in insured damage from the Fort McMurray wildfire, Catastrophe Indices and Quantification Inc. estimated on July 7 that the insured damage was $3.58 billion – one third in commercial property, 62% in personal property and 5% in auto.

Before the Fort McMurray wildfire, the largest single cat event designated by PCS in Canada came in 2013 – also in Alberta. The $1.7 billion flood event was followed by a wind and thunderstorm event that brought significant flooding to Ontario in 2013 at $943 million. Since the launch of PCS Canada, Alberta has sustained insured cat losses of $10 billion, making it the most affected province, PCS said in the report. “That represents 77% of all insured losses from PCS-designated catastrophe events in Canada,” PCS said. “As measured by frequency, however, Ontario has been affected most. The province is included in 53% of all catastrophe events PCS has designated in Canada.” 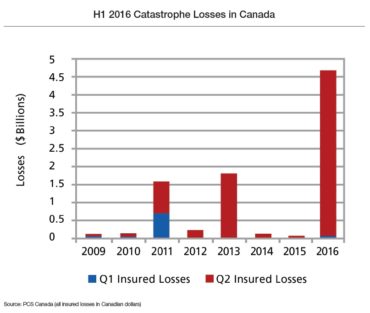 For North America, first-half cat losses are up “modestly” year-over-year, while event frequency has spiked significantly. Second-quarter losses are slightly above the ten-year average of US$8.4 billion, while frequency is in line with the past ten years. Of particular interest, however, is the fact that insured losses from cat event in Texas are up approximately 300% year-over-year, with two significant wind and thunderstorm events in early spring leading to aggregate industry losses of US$4.8 billion.

In total, PCS designated 27 cat events in the United States in the first half of 2016, resulting in US$13.5 billion in insured losses, “a number that could increase because PCS has resurveys pending for seven first-half events.” Those results are nearly 20% higher than the 10-year historical average (2007 to 2016) of US$11.6 billion (not including three Q2 events for which PCS is awaiting a preliminary estimate) and are well above the ten-year frequency average of 21 events. All Q2 events were wind and thunderstorm, and seven included tornadoes, PCS reported. The second quarter of 2016 was “modestly active” at US$8.5 billion, consistent with the 10-year average of US$8.6 billion.

Thirty-nine states were affected by first-half cat events this year, up from 27 in the first half of 2015 and 24 in the first half of 2014. “Wind and thunderstorm activity with significant hail and flooding occurred in several states that usually aren’t affected sufficiently to be included in PCS-designated events,” the report emphasized. Texas remains the hardest-hit state of the year, with 14 first-half events resulting in insured losses exceeding US$7.6 billion. Last year, Texas was the most affected state in the country, but aggregate losses only came to US$2.4 billion. In the first half of 2016, Nebraska was next after Texas, with two events causing just over US$550 million in losses, followed by Missouri (US$440 million), Arkansas (US$410 million), and Illinois (US$360 million).