The government of Alberta announced on Thursday that it is advancing $20 million in Disaster Recovery Program funding to help with uninsurable costs related to the Fort McMurray wildfire. 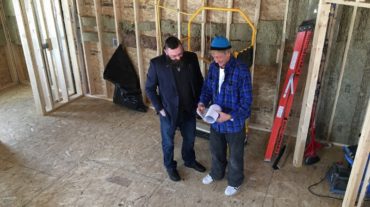 Minister of Municipal Affairs Shaye Anderson looks over Fort McMurray resident’s Steve Menard plans. Menard is rebuilding his home himself after the wildfire tore through his Abasand home in May 2016. Credit: Government of Alberta flickr.

The funding is intended to help with uninsurable costs, such as those related to emergency response, evacuation, cleanup of damaged areas and public spaces and repairs to public infrastructure damaged by the wildfire, Alberta Municipal Affairs noted in a press release.

The government of Alberta noted in the release that it advanced $87.5 million in Disaster Recovery Program funding in 2016 to ensure the Regional Municipality of Wood Buffalo could keep moving forward “without having to carry a heavy financial burden.”

The ministry added that, to date, all re-entry restrictions for the municipality have been lifted, close to 500 development permits have been issued and more than 100 homes are under construction.

“It’s incredible to see the progress that’s been made in the last nine months, but recovering from one of the worst natural disasters in Canada’s history will take years, not months,” the province’s Minister of Municipal Affairs, Shaye Anderson, said in the release.

Alberta’s Disaster Recovery Program is administered by the Alberta Emergency Management Agency, part of Alberta Municipal Affairs, and allows the province to provide disaster recovery assistance to residents, small business, agriculture operations and provincial and municipal governments if the event is considered extraordinary; insurance is not reasonably or readily available; and there is evidence that the event is widespread. It covers events such as wildfire, rainfall, streamflow and ice jams.

In July 2016, Toronto-based Catastrophe Indices and Quantification Inc. (CatIQ) estimated the insured damage from the wildfire at $3.58 billion – one third in commercial property, 5% in auto and 62% in personal property. The wildfire that started in early May resulted in the evacuation of about 80,000 and was the largest insured natural catastrophe in Canadian history. In total, there were about 27,000 personal lines claims averaging $81,000 each, about 5,000 commercial claims averaging close to $250,000 each and about 12,000 auto claims averaging about $15,000 each, CatIQ managing director Carolyn Rennie said at the time.

Early this year, an economist from Edmonton-based MacEwan University estimated the direct and indirect costs of the fire at $9.5 billion. The figure includes the expense of replacing buildings and infrastructure as well as lost income and profits and royalties in the oilsands and forestry industries, Rafat Alam said in a Canadian Press story on Jan. 17. The figure also includes early estimates on indirect costs such as environmental damage, lost timber and physical and mental health treatment.