Property Claim Services (PCS) has updated its insured damage estimate for the Fort McMurray wildfire to $3.98 billion, down from its August estimate of $4.67 billion. 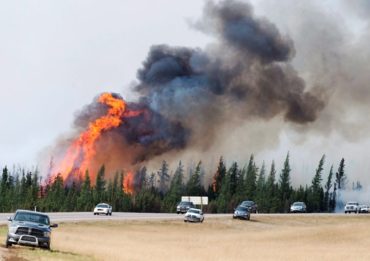 RCMP escort evacuees from Fort McMurray, Alberta past wildfires that are still burning out of control Saturday, May 7, 2016.THE CANADIAN PRESS/Ryan Remiorz

“In working with the Canadian insurance industry, we were able to ascertain a final number for this event,” Ted Gregory, director of PCS operations with Verisk Insurance Solutions, told Canadian Underwriter. “The decline from our previous industry loss estimate (C$4.7 billion) comes from the fact that the latest re-survey reflected more granular data, which insurers were able to garner over time. As a loss develops, insurer insights increase, and that informs the PCS Canada team’s result. Due to the stability of the estimate, the last bulletin is our final for the event.”

Tom Johansmeyer, assistant vice president of PCS strategy and development with Verisk Insurance Solutions, added that “while the Fort McMurray event wasn’t as large as many originally expected, it should still remind the global insurance and reinsurance industry that unexpected events can occur. And they can have an impact on the industry, especially when competition is high for access to reinsurance risk. The event may not have moved the market, but it shows that there’s no substitute for having a broad, informed view of risk.”

The wildfire was the most expensive natural catastrophe in Canadian history when measured by insured losses. It forced the evacuation of about 88,000 people and consumed nearly 590,000 hectares, roughly the size of Prince Edward Island, the Conference Board of Canada noted in a report released on Tuesday.

According to that report, supported with funding from the Insurance Bureau of Canada, about $5.3 billion will be re-invested in Alberta’s economy over the next three years. The Conference Board said that the lion’s share of the $5.3 billion will be absorbed by the insurance industry, which is estimating about $3.6 billion in claims – $2.4 billion in personal property and $1.2 billion in commercial and industrial payments. The board is also estimating 1,935 residential and 23 commercial/industrial structures were damaged or destroyed and more than 12,000 auto claims are expected. Close to 45,000 claims are expected to be processed at an average payout of almost $80,000.

In July, Toronto-based Catastrophe Indices and Quantification Inc. (CatIQ) estimated the insured damage from the wildfire at $3.58 billion – one third in commercial property, 62% in personal property and 5% in auto losses.