A year of fire and floods in North America could lead to a repeat of 2007, when reinsurance disputes emerged over causation issues, a lawyer with global law firm CMS said on Friday. 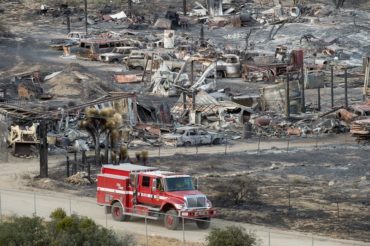 A firetruck passes scorched cars and trailers burned by the Blue Cut fire in Phelan, Calif., on Friday, Aug. 19, 2016. More people returned to their homes Friday as firefighters made significant progress against a huge wildfire burning in Southern California’s San Bernardino National Forest, but that was tempered by the announcement that at least 96 homes and 213 outbuildings were destroyed. (AP Photo/Noah Berger)

Alex Denslow, a partner with the Insurance & Reinsurance Group at CMS, added that contingent business interruption (CBI) exposures are looking increasingly likely this year. “The last time wildfires were as severe and as widespread as they have been this year, disputes over aggregation and proximate cause became a dominant theme,” Denslow said in a press release. “Now, the additional question for reinsurers is: could contingent business interruption exposures also be greater this time round?”

Since the Fort McMurray wildfire in May, losses in North America have continued unabated, with large areas of California now ablaze, he said. “Aggregation was key in a number of arbitrations after 2007,” Denslow explained, “particularly the impact of the Santa Ana winds. It was argued that uncommonly severe winds were the proximate cause of the damage, that this was a natural cause (or elemental cause in elemental/non-elemental treaties), and a factor in favour of a number of the losses being aggregated.”

But other parties argued that power line failures, a manmade (or non-elemental) cause, were responsible, that the winds were unexceptional and simply a background climatic feature, and that each fire should be treated separately, Denslow added.

This year, the wildfires during August have been spread over a wider area, CMS noted in the release. For example, the Blue Cut fire, close to Interstate 15 from Los Angeles to Las Vegas, is more than 433 miles away from the Clayton fire north of San Francisco. No two fires in recent days have been closer than 45 miles, compared to less than 17 miles in 2007, Denslow noted. This points to “each being treated as a separate event.”

In addition, in many excess of loss treaties, losses occurring within a specified number of hours – typically 168 – will be deemed to constitute a single event. “Several of the fires have exceeded the scope of cover under 168-hour clauses,” Denslow point out. “However, certain reinsureds may benefit from reinstatements or the exclusion of cover to 504 hours.”

Another factor to consider is that reports have suggested that disruption to the electricity network is a major concern in this year’s wildfire season. “Power companies are unlikely to be as exposed to claims from property owners as they were in 2007 when sparks were cited as a cause, but a different type of loss – contingent business interruption loss as a result of power outage – may be a greater exposure,” Denslow suggested.

In Fort McMurray, denial of access and industrial outages had the potential to add to the insured losses, even in areas not directly affected by fire. “CBI is rarely subject to express exclusions from cover under reinsurance policies,” Denslow said.

Regarding the Louisiana flood, torrential rain – reportedly two feet of rain in the space of a few hours in early August – has caused flooding to concentrate in the contiguous zones of Louisiana, crossing into Mississippi, “pointing towards a single event easily within the confines of a 168 hours clause.”

“Here, the proximate cause at first sight seems fairly obviously a natural phenomenon, in the form of massive localized rainstorm, but even so, some local figures are describing flooding in certain towns as manmade,” Denslow said. For example, one Louisiana mayor reportedly blamed recent highway works for creating a dam that prevented the escape of flooding from the town and suggested that insurance companies may want to join a potential lawsuit alleging negligence on the part of the state and federal governments.

“The reinsurance market’s relatively recent experience of the Deepwater Horizon disaster illustrates that Louisiana and Mississippi can be particularly litigious jurisdictions,” Denslow said in the release. “The obligation of reinsurers to follow the fortunes of reinsureds exposed to politically motivated class actions in those states – with the additional threat of bad faith punitive damages for delaying settlement – will be of particular concern.”

In conclusion, Denslow said, “these events show that particular care must be taken with reinsurance wordings to ensure that aggregate exposures can be accurately assessed and the wordings fairly police aggregation in a way that accords with the parties’ intentions when they contracted.”

CMS provides clients with specialist, business-focused advice in law and tax matters. The global law firm has 3,000 legal professionals across the world, with 59 offices in 33 countries. It provides expertise across 19 practice and sector areas, including banking and finance, commercial, construction and energy, among others.