Reinsurance sector strongly positioned to deal with potential record-breaking losses of 2017: JLT Re

After five years of below-average loss experience, 2017 looks set to become the “most expensive catastrophe loss year ever for the P&C sector,” but reinsurers’ existing capital base is sufficient to service the bulk of losses sustained so far, a new report from JLT Re suggests. 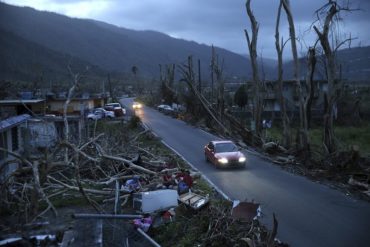 FILE – In this Sept. 26, 2017 file photo, neighbors sit on a couch outside their destroyed homes as the sun sets in the aftermath of Hurricane Maria, in Yabucoa, Puerto Rico. The strongest hurricane to ever hit Puerto Rico in nearly a century, officials predicted before Maria made landfall that it would decimate the power company’s crumbling infrastructure and force the government to rebuild dozens of communities. (AP Photo/Gerald Herbert, File)

The vast majority of these losses are a result of the hyperactive 2017 hurricane season, which has to-date dealt a “devastating triple blow” to residents and businesses in the Caribbean and United States in the form of Hurricanes Harvey, Irma and Maria, JLT said in a press release issued earlier this week. Estimates are suggesting the three hurricanes “are likely to rank alongside other market-defining catastrophes,” with a combined insured loss that could reach US$100 billion, said JLT Re, a part of Jardine Lloyd Thompson Group plc, which provides insurance, reinsurance and employee benefits-related advice, brokerage and associated services.

“Prior to this year’s hurricane season, expectations heading into 2018 were for a softening, but moderating market,” said Mike Reynolds, Global CEO of JLT Re, in the release. “But hurricanes Harvey, Irma and Maria brought a decisive end to a five-year period of below-average global catastrophe losses. In fact, 2017 will be only the third year on record in which global insured catastrophe losses have exceeded US$100 billion (along with 2005 and 2011). This is important because costly natural and man-made catastrophes have historically had a significant bearing on the market and we expect the losses of 2017 to change perceptions of risk going forward.”

Related: Hurricanes to date a capital event for reinsurers, 2017 could be even more costly Cat year than 2005

According to JLT Re estimates, the reinsurance market entered this year’s hurricane season with upwards of US$60 billion of excess capital. “Any net reduction to sector capital is expected to be manageable due to continued capital generation by major traditional players and, perhaps more importantly, sustained capital inflows from alternative sources,” the release said. In particular, reinsurers and insurance-linked securities (ILS) investors are on hook for a “substantial portion” of the US$100 billion catastrophe loss estimate, due to Florida being a heavily reinsured market and several insurers in the Caribbean having modest retentions, the report said. However, retrocessionaires are likely to suffer particularly significant losses, given several reinsurers have taken advantage of competitive market conditions to obtain broader or additional protection in recent years, the report added.

Titled JLT Re Viewpoint – Winds of Change, the report also noted that losses so far this year have fallen within modelled expectations; the sector is well-prepared for three landfalling hurricanes in the “world’s most comprehensively analyzed peak risk region.” As well, “as things stand, JLT Re believes that the nature of the losses in 2017, and the sector’s existing capital buffer, will prevent a repeat of the market reaction that followed the 9/11 attacks in 2001 and Hurricane Katrina in 2005,” the report said. “There was an element of the unexpected with both of these events and it must be remembered that the sector’s capital position was lower and less resilient during these years as it respectively entered and exited the liability crisis.”

These events have reset expectations heading into the January 1 renewal. “For the first time since 2012, upward pricing pressures are likely to build in property-catastrophe lines, particularly in loss-affected regions,” said Winds of change. “But given that average global property-catastrophe rates have fallen by approximately 33% during this time, any increase is only likely to offset this reduction partially. In addition, the length of any market hardening could be mitigated by additional new capital flowing into the sector seeking yield post-event.”

Related: Some reinsurance programs ‘have been called upon four or five times’ in 2017: CMS

Noted David Flandro, global head of analytics with JLT Re: “After eight consecutive years of strong capital growth and lacklustre premiums, the reinsurance sector started the second half of 2017 with more capital relative to risk than at any time in recent memory.

Reynolds pointed out that how capital market investors would respond to major losses has been a constant source of speculation. “2017 could prove to be a landmark year for the future of the ILS market,” he suggested in the release. “Despite concerns expressed by some over investors’ long-term commitments to reinsurance, there are currently no signs of a mass exodus following these losses. Whilst a few providers may exit the market in the coming weeks and months and capital may be unable to roll over in certain instances, JLT Re continues to forecast strong alternative capacity growth over the next several years.”

The report suggested that “perhaps a more permanent feature in the post-2017 environment will centre on risk perceptions and higher loss expectations for future years. Growing demand for additional reinsurance protection is already evident.”