The government of Saskatchewan has announced steps to improve pipeline regulations after the completion of its investigation into last July’s Husky pipeline oil spill. 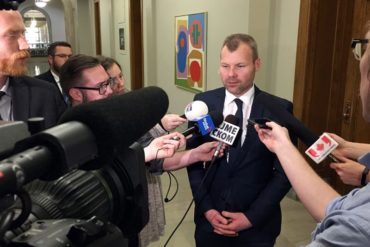 Saskatchewan Energy Minister Dustin Duncan, right, scrums with reporters at the provincial legislature, in Regina, Sask., on Thursday, November 17, 2016. Duncan says the government will need time to review Husky Energy’s report submitted Thursday on an oil spill in Saskatchewan. Husky Energy says shifting ground is the reason a section of its pipeline burst in July, leaking an estimated 225,000 litres of crude and condensate into the North Saskatchewan River. THE CANADIAN PRESS/Jennifer Graham

Energy and Resources Minister Dustin Duncan announced last week that the Ministry of the Economy had completed its investigation into the Husky pipeline incident on July 21, 2016. The findings, which have been provided to the Ministry of Justice, indicate that the cause of the pipeline break was due to mechanical cracking in a buckle in the pipeline. The buckle was caused by ground movement on the slope over “many years,” the ministry said in a statement.

The volume of spilled material is approximately 225 cubic metres of oil blended with distillates.

It is estimated that roughly 60% was contained or recovered on land prior to the point of entry into the river, with the released volume independently calculated by investigators. This volume calculation will continue to guide the provincial response and monitoring of the clean-up, the release added.

Based on the report’s findings, the ministry is taking a series of steps to improve regulations, including:

“Since the Husky spill in July, we’ve recognized that we need to do better when it comes to preventing incidents,” Duncan said in the statement. “The changes announced today will help ensure that workers and the environment are well protected moving forward. We have consulted with industry on these actions. Working together, we will ensure the timely implementation of any changes.”

The report also included the timeline surrounding the occurrence and reporting of the pipeline failure, as follows:

While the technical review – conducted in partnership between the Ministries of the Economy, Environment and the Water Security Agency, with the support of Skystone International – is complete, the full report will be released once all prosecution processes and any appeals have been concluded, the statement concluded.