Still thousands without power as cleanup continues in New Brunswick

LAMEQUE, N.B. – There are still about eight thousand customers awaiting the return of electricity in northern New Brunswick today, more than a week after the ice storm that wreaked havoc in the province. 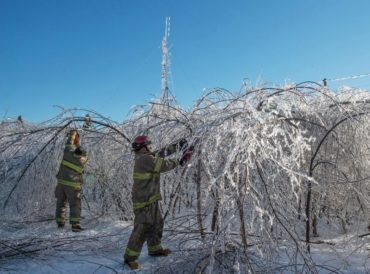 Members of the Baie Sainte Anne Fire Department clear a road so technicians can get to the emergency radio repeater tower to charge the batteries in Escuminac, NB. on Sunday, Jan. 29, 2017. Thousands of people in New Brunswick are still without power, days after a winter storm blasted through the region. THE CANADIAN PRESS/Diane Doiron

The NB Power website shows many of the outages are on the Acadian Peninsula, on Miscou and Lameque Islands, but there are also some residents in Kent County and the Miramichi area awaiting power.

About 200 Canadian Forces troops are in those areas assisting in clearing debris and going door-to-door to check on residents.

The province announced Tuesday it is setting up a disaster relief program and told residents to keep receipts for damage they have suffered.

NB Power president Gaetan Thomas said in a news conference on Tuesday that the storm has caused the most damage of any he’d seen in his 35 year career.

He said the power pole infrastructure was designed to withstand heavy ice loading, but the ice that coated equipment was four times thicker than the most robust CSA standard anticipated.

Sun is causing some of the ice to drop off. Be cautious #nbstorm pic.twitter.com/RRQSJt1KcZ