Volkswagen AG announced on Tuesday that it has reached settlement agreements with various United States government agencies, private plantiffs and 44 states regarding the emissions scandal, agreements totalling more than US$14 billion. 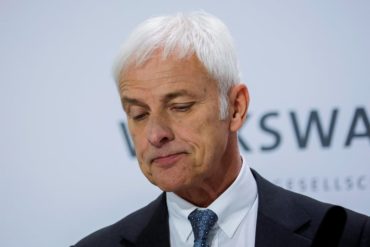 Volkswagen CEO Matthias Mueller attends the company’s annual press conference in Wolfsburg, Germany, Thursday, April 28, 2016. Mueller said the company will launch new electric vehicles and set up a new firm focused on operations like car-sharing as it seeks to get past its scandal over cheating on diesel emissions tests. (AP Photo/Markus Schreiber)

The so-called emission scandal erupted last September when it was learned that the German automaker had fitted many of its cars with software to fool emissions tests and had put dirty vehicles on the road, the Associated Press noted last month.

The agreements with the United States Department of Justice and the State of California, the U.S. Federal Trade Commission and private plaintiffs represented by the Plaintiffs’ Steering Committee “resolve civil claims regarding eligible Volkswagen and Audi 2.0L TDI diesel engine vehicles in the United States,” Volkswagen Group of America said in a statement.

Of approximately 499,000 2.0L TDI vehicles that were produced for sale in the U.S., approximately 460,000 Volkswagen (VW) and 15,000 Audi vehicles are currently in use and eligible for buybacks and lease terminations or emissions modifications, if approved by regulators, VW said in the statement. VW said that it will establish a maximum funding pool for these vehicles of US$10.033 billion, assuming “100% participation and that 100% of eligible customers choose a buyback or lease termination.”

The agreements covering the proposed 2.0L TDI settlement program are subject to the approval of Judge Charles R. Breyer of the United States District Court for the Northern District of California, who presides over the federal multi-district litigation proceedings related to the diesel matter. VW also announced that it has agreed with the attorneys general of 44 U.S. states, the District of Columbia and Puerto Rico to resolve existing and potential state consumer protection claims related to the diesel matter for a total settlement amount of approximately US$603 million.

VW has also agreed to a US$2.7 billion environmental remediation fund over three years and to invest US$2 billion over 10 years in initiatives to promote the use of zero emissions vehicles in the U.S.

Related: AP Sources: VW to pay near $10.2B to settle emissions claims

The company will begin the settlement program as soon as the court grants final approval to the agreements, expected in the fall at the earliest.

“We take our commitment to make things right very seriously and believe these agreements are a significant step forward,” said Matthias Müller, chief executive officer of Volkswagen AG, in the statement. “We appreciate the constructive engagement of all the parties, and are very grateful to our customers for their continued patience as the settlement approval process moves ahead. We know that we still have a great deal of work to do to earn back the trust of the American people. We are focused on resolving the outstanding issues and building a better company that can shape the future of integrated, sustainable mobility for our customers.”

On April 22, VW recognized “total exceptional charges” of €16.2 billion in its financial statements for 2015 for worldwide provisions related to technical modifications and repurchases, legal risks and other items as a result of the diesel matter. As noted at that time, due to the complexities and legal uncertainties associated with resolving the diesel matter, a future assessment of the risks may be different.

“Today’s announcement is within the scope of our provisions and other financial liabilities that we have already disclosed, and we are in a position to manage the consequences. Settlements of this magnitude are clearly a very significant burden for our business,” noted Frank Witter, CEO of Volkswagen AG, in the statement.

But VW said that “the agreements announced today are not an admission of liability by Volkswagen. Regulations governing nitrogen oxide (NOx) emissions limits for vehicles in the United States are much stricter than those in other parts of the world and the engine variants also differ significantly.”