Polled Canadian organizations are struggling to keep up with constant technology change despite executives viewing digital strategy, cyber security and data analytics as quite or highly important skills to their businesses, notes a new report issued Wednesday by PricewaterhouseCoopers (PwC) Canada. 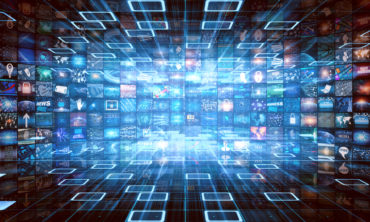 First published in 2007, the report notes that 54% of Canadian organizations – compared to 43% globally – have a dedicated team for digital innovation.

The percentage of Canadian executives who rank a lack of properly skilled teams as among the top barriers to getting results from digital technology is even lower. Just 46% of Canadian organizations did so compared to 63% globally.

“Global respondents see it much more seriously, ranking it as their number one concern,” states the report. 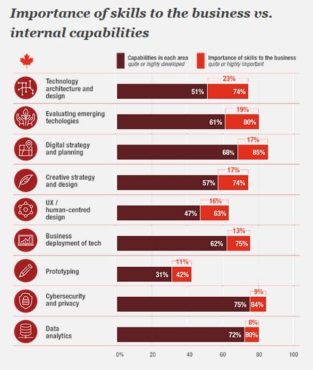 “This attention deficit on training or hiring talent with the right skills can put an organization at risk and become less competitive,” cautions PwC Canada, a provider of assurance, tax, consulting and deals services.

The company reports a majority of Canadian respondents regard outdated technology and integrating new data and solutions as the biggest barrier to achieving results from digital technology initiatives.

While the most meaningful investments today are flowing to IoT and AI, growth is expected across a broader spectrum of technologies over the next three years, notes the company statement. Robotics, AR and drone technologies appear “poised for the greatest near-term growth,” it adds.

In all, 28% of Canadian executives who took part report that AI is expected to shake up their industries and businesses over the next five years, while IoT (52%) and robotics (15%) are seen as holding the most potential to cut costs.

“Organizations that invest in the right skills and foster a strong digital culture will emerge as winners in the digital era,” suggests Nadir Hirji, partner Strategy& and lead, PwC Canada Digital Services.

“Digital and technology is not a future agenda item,” Hirji emphasizes. “Rather, leaders need to create a digital culture now if they want to stay ahead of the competition. It begins by setting a vision for the transformation that is meaningful and holistic.”

Progress, however, is being made. “Canadian organizations are unlocking the value of their digital investments and encouraging a culture of innovation to harness the power of technology to transform their business and deliver results,” the statement notes.

The report found that, in Canada, 8 out of 10 respondents name revenue growth as their biggest outcome from their digital investments. That compares to 57% globally.

Despite the progress, organizations appear no better equipped today to handle the changes coming their way than was the case when the first Digital IQ report was launched a decade ago. “They aren’t so much falling behind as struggling to keep up with constant technology change,” PwC Canada points out.

“As companies become more sophisticated about technology adoption, the questions around how to stay ahead get harder,” the report advises. “And while Canadian executives say they’re doing a lot in digital, many are conservative in their approach – often hesitant to move ahead boldly.”

The report findings show that 30% of Canadian respondents compared to 14% globally see “‘digital’ as just about customer-facing technology activity.”

Digital should account for a large portion of the organization’s strategy that reaches beyond customer-facing activity, it recommends.

“The imbalance between the skills an organization needs and the skills its employees have can hinder its ability to adapt continuously and anticipate change,” the report suggests. “But integrating digital internally needs to be a priority because organizations that invest in the right skills and foster a strong culture will emerge as winners in the digital era.”

Encouragingly, seven of 10 polled executives in Canada already incorporate digital strategy into corporate strategy, PwC Canada reports. “Yet, they’re not as focused as they should be on the details of its implementation, such as developing roadmaps, measuring outcomes and improving decision-making,” the company adds.