Additional rainfall could result in more flooding in southern Louisiana, already hit hard by extensive flooding associated with one of the state’s most catastrophic, non-tropical cyclone-triggered flood events in decades. 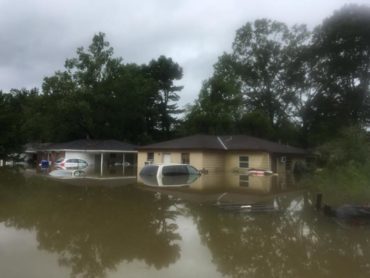 A flooded neighborhood near the confluence of the Comite and Amite Rivers near Denham Springs, LA. James Fountain, USGSPublic domain

As of Wednesday afternoon, the statement notes that “two flood advisories and eight flood warnings remained in effect in Louisiana. The state of emergency is scheduled to remain in effect until September 10.”

AIR Worldwide reports that extensive precipitation-induced flooding over the previous two weeks has resulted in major property damage, significant business interruption and the deaths of 13 people.

Initial estimates from Louisiana’s Office of Homeland Security and Emergency Preparedness indicate that more than 60,000 homes have been damaged in the 20 parishes affected, notes AIR Worldwide.

Citing a preliminary analysis for the nine parishes within the Baton Rouge metropolitan area issued by the local Chamber of Commerce (BRAC), it indicates the Capital Region’s area of flood impact covers more than 1,000 square miles.

“The total value of properties in these flood-affected areas is estimated by BRAC to be US$20.7 billion,” AIR Worlwide reports in the statement. Of the total, 66% were owner-occupied, 22% were rented and 9% were vacant.

The Federal Emergency Management Agency estimates that 42% of homes in high-risk areas of Louisiana have flood insurance, although just 12.5% have coverage in low- and moderate-risk zones.

“Across Baton Rouge as a whole, no more than 15% of all homes have flood insurance, and in the other hard-hit location, Lafayette, the rate is 14%,” notes the statement from AIR Worldwide.

The flooding across parts of Louisiana and southern Mississippi could approach or possibly exceed US$1.5 billion in economic damage, Impact Forecasting, Aon Benfield’s catastrophe model development team, has reported.

Related: Louisiana, Mississippi flooding could exceed US$1.5 billion in economic damage, insured portion will be much less: Impact Forecasting

“It is currently anticipated that the August 2016 event will approach and possibly exceed this cost once all damage incurred to homes, businesses, public facilities, vehicles, infrastructure, and agriculture is taken into account,” Impact Forecasting noted earlier this month.

The company anticipates the insured portion of the economic loss will be substantially less, the company reported, citing the large percentage of homeowners and business owners uninsured or underinsured for flood damage.

A slow-moving tropical depression-like system plagued much of south central Louisiana from August 8-15, with some regions receiving as much as 15-30 inches of rain over just a two-day period, AIR Worldwide reports.

“Some rainfall values were in the range of a 1,000-year return period in the parishes of St. Helena, Livingston and East Baton Rouge just north and east of Baton Rouge,” the company statement notes. “Parts of the region received two to four times the average total monthly rainfall for August in just three days.”

“The historic flooding in and around Baton Rouge and other areas is a combination of several factors, including riverine (on-floodplain) flooding, backwater in tributaries due to high flood stages in main rivers, and significant local flash flooding (off-floodplain) caused by intense rainfall, flatter terrain and limited drainage capacity that was further exacerbated by backwater effects,” Chowdhary explains.

“Many of the areas that flooded were outside the 100-year floodplain and were not considered at high risk,” he points out.

Recovery, however, has started, with waters now receding, state offices reopening and many people returning to their homes and businesses.

Because flood damage and associated losses can result from time-related elements and vary greatly by exposure, “the impacts to the insurance industry will become clearer as floodwaters recede and assessments can be conducted,” AIR Worldwide reports.

“The event stresses the importance of understanding what, if any, flood coverage is included in a standard homeowner policy, and serves as yet another warning to those considering dropping or forgoing flood insurance,” Risk Management Solutions, Inc. (RMS) cautioned in a statement last week.

“Relying on historical record or experience alone can create a false sense of security for anyone trying to understand their flood risk,” RMS suggested.

Louisiana was already experiencing one of the “Top 20” wettest years on average leading up to the event, Jeff Waters, a meteorologist and flood risk expert at RMS, says in the company statement.

“The already heavily saturated soil conditions have only helped to exacerbate the flooding, signifying the importance of having a view of flood risk that inherently reflects antecedent conditions pre-event,” Waters explains.

“Doing so ensures that rainfall discharge, runoff and inundation are captured as accurately as possible,” he adds.

More News
Related
Flash estimate for insured losses from Hurricane Hermine US$500 million: KCC
Louisiana flooding “one of the most significant” natural disasters since Superstorm Sandy, 40,000-60,000 properties affected: RMS
Estimated insurable losses from Louisiana floods to range between US$8.5 billion and US$11 billion: AIR Worldwide
Estimated insured losses for U.S., Caribbean from Hurricane Matthew US$2.5 billion to US$8 billion: RMS