Current-year financial results for Canada’s property and casualty industry – which were once again strong in 2015 – are expected to take a hit in the wake of the Fort McMurray wildfire loss, notes a new report from A.M. Best. 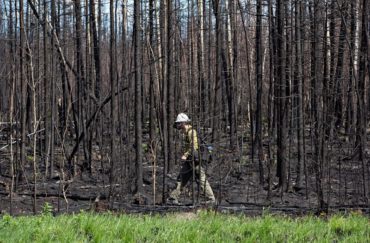 Fire crews work the tree line in Anzac near Fort McMurray, Alta., on Saturday, June 4, 2016. Members of the community are now being allowed back into their homes. THE CANADIAN PRESS/Jason Franson

“The Canadian economy faced a number of headwinds during the first half of 2016, most notably the devastating Fort McMurray wildfires and the continued weakness in the commodity industries,” the rating agency reports in a statement Wednesday.

Despite the headwinds, however, recent economic data has signalled that the economy has been firming slightly, notes the A.M. Best report, Canadian Review/Preview – 2016: A Return to Sustainable Growth?

Mainly driven by continued weakness in the energy sector, the report states that Canada’s real gross domestic product (GDP) contracted by 0.4% in 2016 Q2. 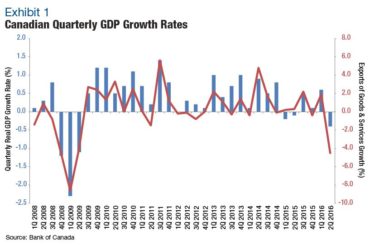 “While commodity-related industries will likely remain an economic drag near-term, if you were to strip out the impact from the wildfires and the commodity cycle, the economy would have posted a growth rate of 0.1% in the second quarter,” it notes.

“As the commodity cycle stabilizes over the coming year, so should the Canadian economy,” the report predicts.

It points out that slightly stronger growth should return for the second half of the year as a result of stabilization of the commodities sector, an improving business outlook, a weaker Canadian dollar and continued strength in the services sector.

“Canada’s services sector continues to grow, led by insurance and finance, transportation, accommodations and food services,” it adds. “A continued stabilization of the resource-dependent sectors, including oil, gas, metals, diamonds, and coal, will help to reduce current excess slack in the economy.”

These factors, the report suggests, will make the worst catastrophic p&c event in Canada’s history an earnings event for those insurers.

“What this event will indicate at year end is that it was actually an earnings event for the Canadian domestic p&c industry,” Joel Silverthorn, a senior financial analyst at A.M. Best, says in a company statement.

“It was not an event that’s going to hit many companies’ surpluses,” Silverthorn adds.

In the MSA Quarterly Outlook Report for Q2-2016, released in late September, Joel Baker, president and CEO of MSA Research Inc., noted the wildfire may have been an “earnings event” for the largest insurers in Canada’s p&c industry, but that was not the case for some smaller regional writers.

“It was definitely a capital, if not an existential one, as reinsurance limits were tested and second reinstatements desperately sought,” Baker wrote in the report.

Had the damage been more extensive or had a second major Cat occurred in quick succession, he noted, “it might have proved fatal for a few carriers.”

“As volatility in commodity markets such as oil and gas, the weakening of the Canadian dollar and the Bank of Canada’s reduction in the overnight rate have led to economic challenges for Canada, many insurers continue to seek opportunities globally to grow and diversify,” reports A.M. Best.