Property losses from flooding in Texas caused by Hurricane Harvey’s record-breaking rainfall will be between US$65 billion and US$75 billion, catastrophe modelling firm AIR Worldwide estimated in a press release issued late Wednesday. 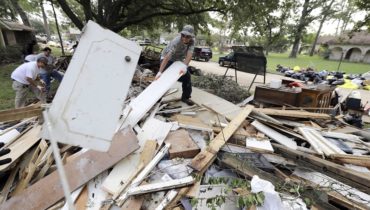 The estimate includes damage to all properties eligible for coverage regardless of whether they are actually insured and without any application of deductibles or limits, AIR Worldwide stipulated. The estimate also does not include losses from Harvey’s winds or storm surge.

AIR estimates that industry insured losses from wind, flood and storm surge combined are expected to exceed US$10 billion, with approximately US$3 billion of the losses resulting from winds and storm surge. The estimates do not include losses to the National Flood Insurance Program (NFIP), which Risk Management Solutions, Inc. (RMS) estimated in a blog last week to be between US$7-10 billion.

Related: CoreLogic estimates insured flood loss for homes affected by Hurricane Harvey at US$6.5 billion to US$9.5 billion

After making landfall as a Category 4 hurricane near Rockport on Aug. 24 – hovering over Texas for the next five days and then travelling through western Louisiana the following week – Harvey was downgraded to a “remnant low” over the weekend of Sept. 2 to 3, it then moved into the Ohio Valley and dissipated. According to AIR, it had been almost a decade since the last hurricane landfall in Texas – Hurricane Ike in 2008 – and the last Category 4 storm to impact the state was Hurricane Carla in 1961. The last Category 4 hurricane to make landfall anywhere in the United States was Charley in 2004, which struck southwestern Florida, AIR noted in the release.

Harvey brought excessive and record-breaking rainfall: 51.88 inches were recorded in Cedar Bayou near Houston, shattering the previous 48-inch rainfall record from any tropical storm or hurricane in the contiguous United States set by Tropical Storm Amelia in 1978 in Medina, Texas. The National Weather Service in Houston officially recorded 43.38 inches, while 32.47 inches were recorded at Houston Hobby Airport, exceeding the previous 3-day record for any major U.S. city. In Beaumont, 26.03 inches of rain were recorded on Aug. 29, more than doubling its prior daily rainfall record of 12.76 inches set in 1923; the rainfall total there has been reported at 47.35 inches. As of Sept. 6, more than five stations across southeastern Texas had surpassed 45 inches of rainfall. “Reports indicate that Harvey dropped a total of 27 trillion gallons of rain on Texas and Louisiana in six days,” AIR said in the release.

Related: Economic losses from Hurricane Harvey could be as high as US$70-90 billion: preliminary RMS estimate

More than half of the 120 river gauging stations in the Houston/Galveston area were in various stages of flooding during the event; several experienced major flood stages and crested with new record-setting flood levels. Buffalo Bayou, which flows through downtown Houston, crested at 63.5 feet – two feet higher than the previous historical record of 61.2 feet set in 1992. Cypress Creek, which flows through neighbourhoods north of downtown Houston, crested about three feet higher than the previous record of 94.3 feet set in 1949. Similarly, Neches River at Beaumont crested at 21.5 feet, about 10 feet higher than the previous record set in 2006. Flood levels corresponded to astounding 750-, 200-, and 100-year return periods for river water level stages on Cypress Creek near Westfield, Greens Bayou near Houston, and on West Fork San Jacinto River near Porter.

Homes in and around Houston are under three or four feet of water, overtaken by river and bayou flooding, with some residents reporting waterlines at more than six feet in their flood-damaged properties, the release said.  In Wharton, the overflow from Houston has travelled southward and flooded homes. Much of the affected area is still flooded, although waters have receded in some areas.

Related: Insured losses from Harvey’s wind, storm surge as much as US$2.3 billion: AIR Worldwide

AIR’s property loss estimates for flooding from Harvey capture losses from inland flood both on and off the floodplain based on simulated event scenarios that reflect uncertainty in precipitation observations, river flows and modelled levee failures. The modelled hazard intensities reflect the maximum estimated river flows and maximum excess runoff intensities during the event from Aug. 25 to 31.

The range in AIR’s loss estimates reflects uncertainty in the payment of additional living expenses resulting from relocation, time spent in secondary housing, lost wages, loss of electricity and damage to contents.